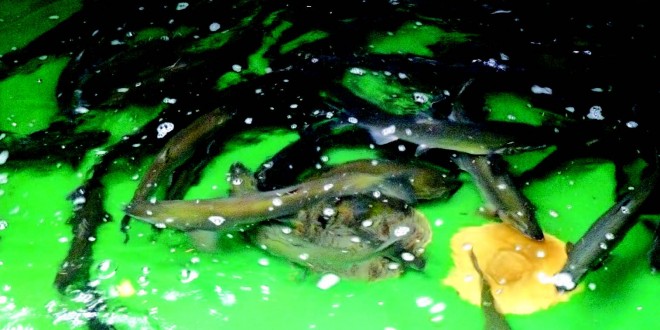 The Chapman Creek Hatchery on Field Road is a great place to take in the wonders of nature and to appreciate the work being done to help salmon enhancement. Thanks to recent rains, Coho and Pink salmon are presently vigorously swimming and leaping up Chapman Creek to spawn. And some come through the hatchery channel and into the hands of biologists, fish techs and volunteers, who come together to help increase salmon populations on the Coast.

They are pretty busy this October, taking eggs and spawn, to be reared and released next year, once the fry are old enough to return to the ocean. The young salmon can be seen swimming in the holding tanks on site, as fish tech and manager, David Burnett monitors their health, water temperature and feed.

“Warmer water temperatures stress the fish out,” Burnett said, adding these climate change conditions can cause salmon to get a fungus that weakens them on their journey home to spawn in the creek. There are a lot of tasks that need to be done with vigilance to look after salmon, so Hatchery staff really appreciate their volunteers, who they note are a tremendous help. Hatcheries work on a very tight budget that is supplemented through fund raising, Burnett said.

“We have a core of about 20 volunteers who come on a fairly regular basis,” Hatchery board vice president Lee Melnychuk said, adding most of them are seniors. This day four have shown up in the early morning ready to help, including Mike, who came back only three months after suffering a stroke.

The volunteers weigh each particular fish food and feed the young salmon, clean tanks and trays along with some even tougher tasks like sorting eggs, staff noted.

“They have to put their bare hands in 13 C cold water to sort out the non-viable eggs from the good ones,” Melnychuk said with admiration, “after a while they come warm their hands on the heater and then go back to sorting again.”

They do have some younger people help out at times when volunteers bring their grandkids to give a hand, carrying buckets and washing trays, and they get teens involved through their youth volunteer program.

“It’s very inspiring to work with the high schools,” the salmon enthusiast noted. In honour of Rivers Day on September 28, many groups hold events and visit hatcheries and fresh water streams to emphasize the beauty and important resource they represent to all British Columbians.

via Volunteers key to helping Coast salmon | The Local.